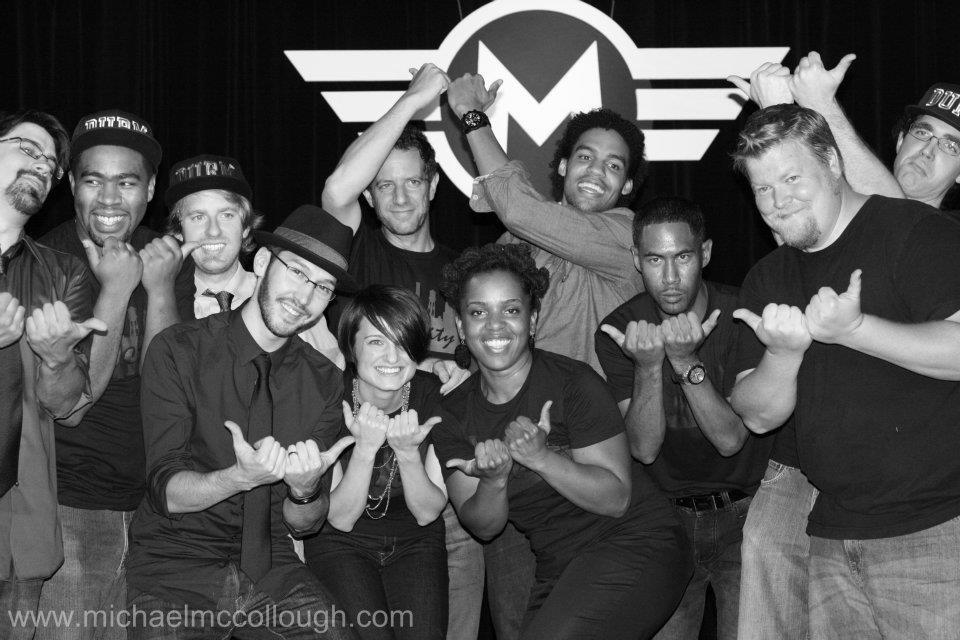 The Beast is a Durham-based jazz and hip hop quartet with roots in the UNC community. Hailed as a, “natural, engaging blend of jazz and hip hop” by Jazz Times Magazine, The Beast has been voted “Best of the Triangle: best hip hop act” by the Independent Weekly for three consecutive years (2010, 2011 and 2012).

The quartet developed its sound at UNC-Chapel Hill, where pianist Eric Hirsh, drummer Stephen Coffman, and bassist Peter Kimosh studied jazz in the music department, while emcee Pierce Freelon (now a professor in the departments of music and African and Afro-American studies at UNC) developed his intelligent lyricism in classrooms and music venues across campus.

The Beast + Big Band is a larger scale ensemble, stemming from this core. With the addition of a horn section (trumpet, tenor saxophone, alto saxophone, and trombone), cello, violin, guitar, and percussion, The Beast has been able to explore new compositions and arrangements that meld a traditional hip-hop foundation with an exciting modern Jazz sound. The Beast + BIG BAND had their debut show in June of 2012 as part of Duke Performance’s summer music series: Music in the Garden. The large ensemble will record an EP at Sound Pure Studios on January 26-27.

Leading up to the recording, The Beast + Big Band will hold an open rehearsal on UNC’s campus at the Kenan Music Building. This rehearsal will be an opportunity for the general public to get a glimpse into the creative process, as well as an opportunity for music students to engage their professional peers in a collaborative setting. The rehearsal will be followed by an interactive Q&A with arranger/composer Erich Hirsh. A 3-time winner of the ASCAP Foundation Young Jazz Composers Award; Hirsh participated as a pianist and composer in residence at the Kennedy Center for their 2009 Betty Carter Jazz Ahead program; and he is a 2011 North Carolina Arts Council Fellow.

Please join us for an intimate rehearsal and Q&A with some of North Carolina’s most talented musicians.