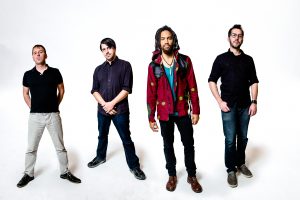 Now in its twelfth year, The Beast is an innovative and electrifying hip hop and jazz ensemble, known for pushing creative boundaries and dynamic collaborations. Straight outta Durham, the cultural and entrepreneurial nexus of a new south, The Beast is a home-grown artistic force, mixing tap-dancers, puppeteers, and spoken word artists into its repertoire.

In July 2017 the band released “Woke,” its second full-length album, produced by Philadelphia native Steve McKie, who has recorded and drummed for Bilal, Jill Scott, Musiq, and others. Emcee Pierce Freelon sums up the meaning of the album:

There is an awakening, a remembering happening in the United States, the likes which have not been seen since the Black Power Movement. The movement for Black Lives has resurged, and is being led by radical, Black, queer, Afrofuturists – organizers, artists, scholars and citizen journalists. We are powerful. We are envisioning new worlds, and new possibilities for ourselves, here on earth and beyond. In the traditions of Harriet Tubman, and Ella Baker, and Ida B Wells, and Pauli Murray, and James Baldwin, and Nina Simone, and Octavia Butler and Sun Ra – we are on the mothership. Y’all had a good run, but we’re evolving. We are infinite. We believe we are super-heroes. We are WOKE.